ABOUT THIS COLLECTIBLE SET

“A rematch? Maybe some other time when I don’t have a mission to worry about.”

The Cammy: Evolution 1:3 Scale Statue Set includes her Killer Bee and SF2 Classic looks as well as the devious Decapre, a Shadaloo Doll clone of the expert assassin. Her muscular physique and overall look are recreated based on in-game models to give fans accurate, high-fidelity collectibles of the second lady of Street Fighter.

Each statue in the Cammy: Evolution 1:3 Scale Statue Set measures 28” tall, standing on a bridge inspired by the in-game English Manor stage from the Street Fighter series. Base to base the collection measures 39” wide, creating an epic display on your shelf. Each statue features a mixed media costume with a tailored fabric bodysuit in addition to sculpted accessories like her gloves, hat, and boots. Decapre also includes two distinct portraits- an unmasked face that reveals her burn scars, and a masked face with red eyes. The masked portrait includes a light-up feature on the eyes as an exclusive display option for the Cammy: Evolution set. Striking an intimidating pose, Cammy is ready to Delta Drive her way to victory versus any foe.

The Sideshow Exclusive Edition of the Cammy: Evolution 1:3 Scale Statue Set also includes a signed 11x17” art print by artist Edwin Huang depicting all three versions of the elite assassin. These exclusive accessories make this set a must-have for diehard fans of the Street Fighter series!

Take your Street Fighter collection to the next level and bring home the Cammy: Evolution 1:3 Scale Statue Set by PCS Collectibles today! 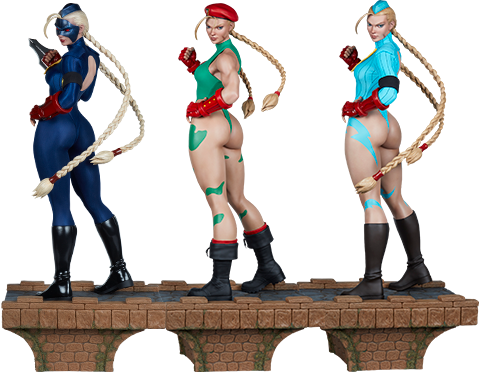