Elegance, style, class, talent, and an engaging personality are the ingredients that have made a multi-faceted actor such as Jack Lemmon the symbol of a type of cinema that has survived through time without any detractions to its artistic value. Lemmon succeeded in performing in different genres and styles with unparalleled sophistication and expertise. He played in theatre, television, and film with the same ability. From pure comedy to nostalgic scenes and comic tragedy.

"Lemmon was my street man, and he could act anything… I loved him for what he was. And in everything he did, there was a touch of genius”, is how comedy giant Billy Wilder described him. It was not the two Oscars that made him the great actor that he was, but the parts he played, his brilliance in performance, his innate expressive naturality that immediately induced you to love the character in question. But his partnership with Walter Matthau created a unique, remarkable combination, that still today is enchanting to watch.

Jack Lemmon was, and remains, inimitable, and in many ways unsurpassable. Perhaps we have always had a “painstaking” friend, a meticulously tidy room-mate, the companion who clears up your desk even when you don’t ask him to, who makes the bed while he is still in pajamas. But he is also someone who knows how to cook, wash the dishes, hoover the carpet and removes the crumbs from the settee.

One of the parts that brought fame to Jack Lemmon was exactly this: a character whom he was capable of playing with sophisticated elegance, in which every move, every obsession with hygiene or idiosyncratic tidiness was expressed by means of an unparalleled physical comedy. Here we have distilled the very best of this entire world, depicting Lemmon with his characteristic expression of disdain for his blundering, disorderly friend who makes his life impossible. The guy who spilled a beer can, right after he had finished hoovering the carpet…

© 2021 Jack Lemmon™ used with permission by The Lemmon Family Trust 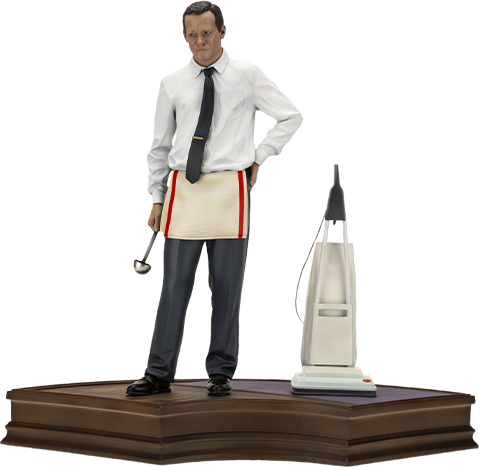