In the far west, many dreams and fantasies have been lived out, episodes that have been vividly evoked on film for so many years that the records of the earliest movies of this type have virtually been lost. They were fuelled by American history, with its momentous conflicts, battles, violence, conquests, and comebacks, in which myths have developed almost to the point of becoming legends. The world of westerns has also created legends of its own, and probably the most famous and indestructible of all is that of John Wayne. He has become an indisputable icon, not just of American and international Cinema, but of an unmistakable film-making “approach”. His expression, and his large, imposing physique, made him a monument of character and a model of style. John Wayne is the old west: he, more than any other actor, is the incarnation of a whole cinema genre. Welcome to the west.

Sideshow and Infinite Statue present the John Wayne 1:6 Scale Statue from the Old & Rare collection. This is a sculpture project that required more time and effort than for virtually all the others that we had previously made. The study of details developed directly from the John Wayne archives enabled us to attain absolute accuracy in both historical and technical aspects. The notable size of an equestrian statue in this format, featuring John Wayne himself (a man 193 centimeters tall), makes it a true cult object for everyone who loves cinema and a great actor of Wayne’s caliber. Nothing comparable dedicated to the world of westerns had ever been created before. 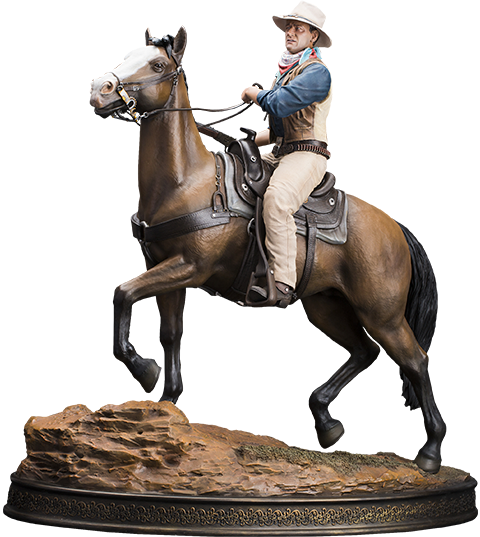