“Shame on you, when you step through to The Ol' Dirty Bastard, Brooklyn Zoo!”

Sideshow presents the Ol’ Dirty Fine Art Print by artist Mike Thompson, in honor of the legacy of one of Brooklyn's own – the American rapper Ol’ Dirty Bastard.

A legend of the music scene, ODB left his mark on hip hop culture both as one of the founding members of the legendary Wu-Tang Clan and as a breakout solo artist. His debut solo album “Return to the 36 Chambers” delivered rhymes in a unique style of his own, backed by massive, extraordinary beats.

Artist Mike Thompson pays tribute to this eccentric icon representing his home borough of Brooklyn, New York. Behind him, the word “Dirty” shines bright in lights over New York City and the famous Brooklyn Bridge – an image as massive as ODB's personality- emphasizing Ol’ Dirty Bastard’s star status both on and off the stage. Profane, carefree, and a folk hero to countless fans, ODB’s larger than life persona lives on through his music, immortalized in platinum.

Each Ol’ Dirty Fine Art Print features an authorized, automated artist signature and an embossed Seal of Authenticity as a part of this limited edition, produced exclusively through Sideshow. This vibrant portrait is officially licensed by the ODB Estate and is a must-have for hip hop music fans everywhere.

Return to the 36 Chambers with Sideshow and add the Ol’ Dirty Fine Art Print by Mike Thompson to your collection today.

Best known for his portraits of entertainers and celebrities, Mike Thompson has built a name for himself in the world of art. His paintings have been featured on television, in print and web campaigns. Mike began his career working as both Designer and Art Director in the fashion industry. After creating top selling designs for companies such as Timberland, Ecko and Nike, the artist left the corporate world to become a full-time illustrator.

Over the past decade, his artwork has been featured on magazines, videogame covers, movie posters and toy packaging. Some of the clients Mike has worked with include: Marvel, Hasbro, Warner Bros, Dimension Films, and Cartoon Network. 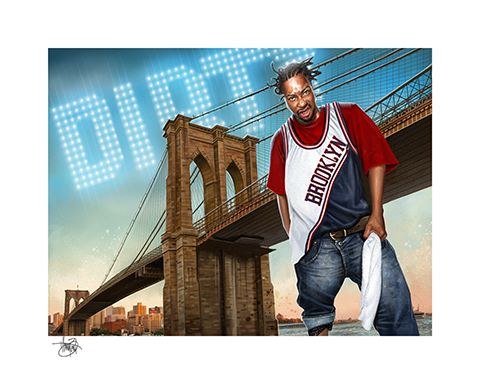