“As a member of the Avengers, either past or present, you are cordially invited to the party.”

Join the Avengers as they assemble for the ultimate superhero social! Rendered in Kat Hudson’s signature retro-futuristic style, this vibrant composition includes 18 of Earth’s Mightiest Heroes and their allies cutting loose and relaxing after a long day of defeating villains. Tony Stark and Pepper Potts share a private conversation at the bar while Thor challenges Captain America to lift his mighty hammer Mjolnir. Doctor Strange uses his magical powers to steal a snack from Vision as Ant-Man and the Wasp fly onto the scene. Guardians, Asgardians, and even Spider-Man swung by to join the festivities- but wait, has anyone seen Drax?

Each Party at Avengers Tower Fine Art Print features an authorized, automated artist signature and an embossed Seal of Authenticity as a part of the limited edition of 600 pieces. This colorful and character-filled illustration is a must-have for fans of any Marvel superhero!

Get the party started in your Marvel collection and bring home the Party at Avengers Tower Fine Art Print by Kat Hudson today!

About the Artist:
As a character designer, Kat Hudson has had clients that include Disney, Dreamworks, and Hasbro, In the past she has been a character designer for Fx Network'd Archer, and is currently a designer for Warner Brothers Animation on the reboot of DC Superhero Girls.
Kathryn received her BFA from Belhaven University in Mississippi and went on to complete her MFA in Illustration at the Savannah College of Art and Design. She and her husband moved from Atlanta to Los Angeles in 2017.
Kat's work combines the minimalism of mid-century aesthetics with hyper focused colors, textures, and patterns. 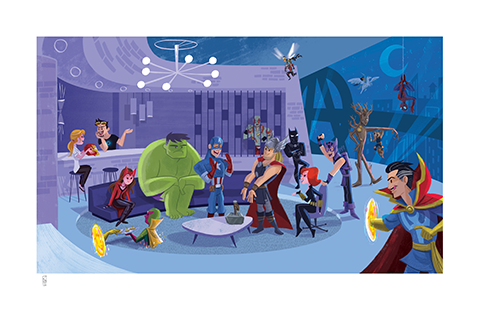