“I am the one true champion. It's time you learned your place"

Sagat was the first boss many Street Fighter fans ever encountered, and he remains one of the most vicious competitors in the game. Defeated at the hands of Ryu in the very first Street Fighter video game, Sagat returned in Street Fighter II, scarred, but more determined than ever to prove himself as the ultimate martial artist!

“As soon as I finished the Ryu 1/3 sculpt, my mind started reeling with plans for Sagat. These two characters have more history than any pair in Street Fighter. Their rivalry literally goes back to the very first game!” says Pop Culture Shock President Jerry Macaluso. “Even in its earliest stages, the size of this sculpture was immense! Working on this piece has been a lot of fun. The greatest challenge was trying not to reveal too much too soon” Macaluso joked “So, I’m really excited that we finally get to share this amazing piece of art with our collectors!” “There was a lot of discussion internally about what the final pose would be for Sagat, and we ultimately decided that to do Sagat justice we should offer two torsos.” recalls Macaluso “One clutching his scar, and another with his arms folded in his famous victory stance.”

The Exclusive version of Sagat will feature his trademark blue shorts with yellow trim, eye patch and a highly detailed platform base. This is Sagat in his most recognizable attire, clutching his scar and grimacing at his fallen enemies. 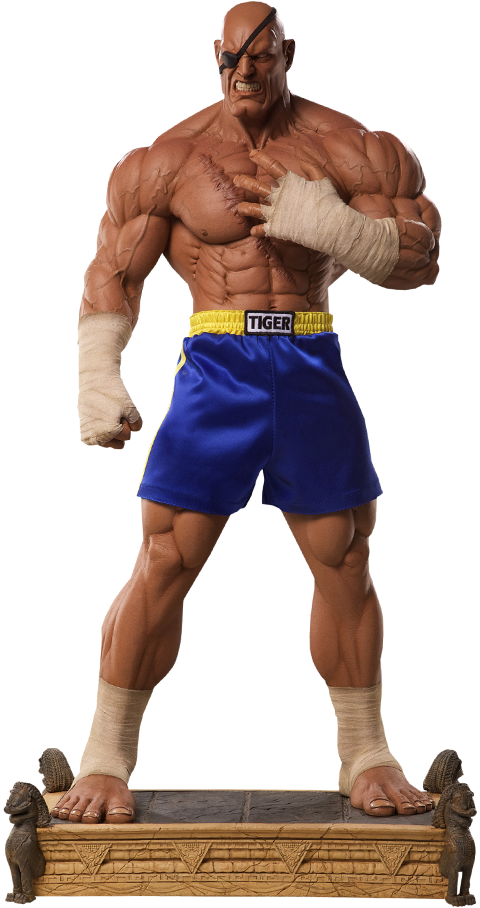