Sideshow is proud to introduce Shard: Mortal Trespasser, based on an original character design from our Court of the Dead Premium Format Figure collection.

"Living or dead, it makes no difference to my blades."

Shard is the first living, breathing mortal to ever set foot in the Underworld. To better prepare her for the harsh environment of the realm of the dead, the former Templar knight is adorned with armor forged within the capital city of Illverness. The fine bone filaments of this protective encasement were woven around her form by the osteomancers and artisans of the dead. Though most trappings of humanity are now beyond her reach, Shard still carries the weapon that served her for so long in the mortal realm - a blade called “Faith Bearer,” which is infused with the essence of one of the heavenly host. It is a deadly weapon, only rivaled by its newly forged twin - the sword known as “Seraph’s Woe," which contains the spirit of one of hell’s greater demons. It is no surprise that even in the Underworld, most beings give this defiant trespasser a wide berth. Though she may be the only living being in Death’s realm, there is no fear in Shard’s eyes.

Comprised of high-quality polystone and metal. 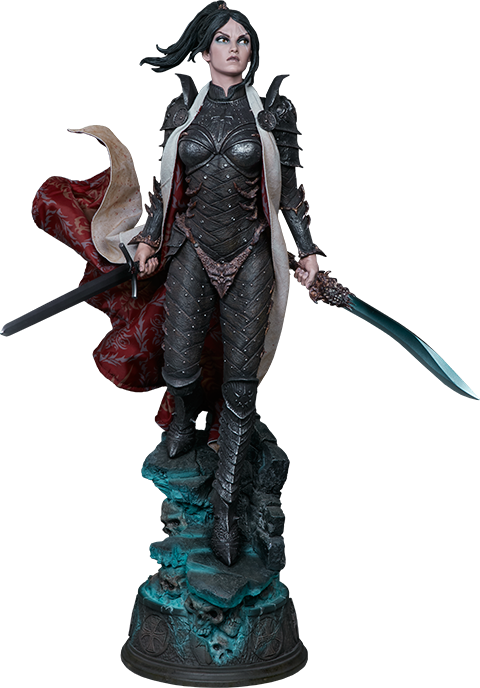