“You’ll believe a man can fly.”

Sideshow presents the Someone To Believe In Fine Art Print by artist Kristopher Meadows.

In this stunning, heartfelt tribute to the Man of Steel, oil-painter Kristopher Meadows expertly captures the likeness of Christopher Reeve as Superman, rising up into the sky as an inspirational symbol of hope, liberty, and justice. Striking a pose reminiscent of the Statue of Liberty, the hero is set against a romanticized backdrop of the American flag, which features just three sets of stripes and four stars in special honor of the actor, who was 34 years old the last time he donned the famous tights, in Superman IV: The Quest for Peace.

The original painting has long garnered special recognition and praise among the Superman fan community, as well as with Reeve himself, who acknowledged Someone To Believe In as a personal favorite fan tribute to his portrayal of the Man of Steel and kept a replica of the original painting proudly hung behind the desk in his home office.

For the first time ever, fans will have an opportunity to bring home an officially licensed, faithful reproduction of this fine masterpiece by Meadows. Each print features an authorized, automated artist signature and an embossed Seal of Authenticity as a part of the limited edition of 500 pieces. Considered to be one of his finest works to date, Someone To Believe In is a must-have for Superman fans of all generations.

Up, up, and away! Take a leap of faith and add the Someone To Believe In Fine Art Print by Kristopher Meadows to your DC Comics art collection today.

About the Artist:
Kristopher Meadows began his career at the age of three by copying cover illustrations and interior panels from his favorite DC and Marvel comic book titles. He turned his attention to portraiture at the age of thirteen and quickly developed the skill to “see” and realize a drawing that captured the “spirit and soul” of his subject. After high school, Meadows attended Central Florida Community College and was the first student in the college’s history to be given the honor of a one-man show during his first year. A little more than a year later Meadows enrolled in the Savannah College of Art and Design on a partial scholarship and graduated with honors and a BFA in illustration and a minor in Art History.
Influenced by great portrait painters such as John Singer Sargent, Anders Zorn and Joaquin Sorolla, Meadows employs a painting technique known as alla prima, Italian for “at the first”. The idea is to capture the essence of the subject in a bold, intuitive way, using vigorous, expressive brushstrokes and minimal color mixing on the palette. He has painted portraits of several distinguished individuals including Michele Wiles, principal ballet dancer for The American Ballet Theatre; actor Christopher Reeve; First Lieutenant Roger Mullin for the U.S. Army and Richard Yarbrough, managing director for the 1996 Atlanta Olympics. Meadows is a member of the Portrait Society of Atlanta, The Portrait Society of America and Oil Painters of America. His work has been featured in national publications such as American Art Collector Magazine as well as in group exhibitions.

SUPERMAN and all related characters and elements © & ™ DC Comics. (s20) 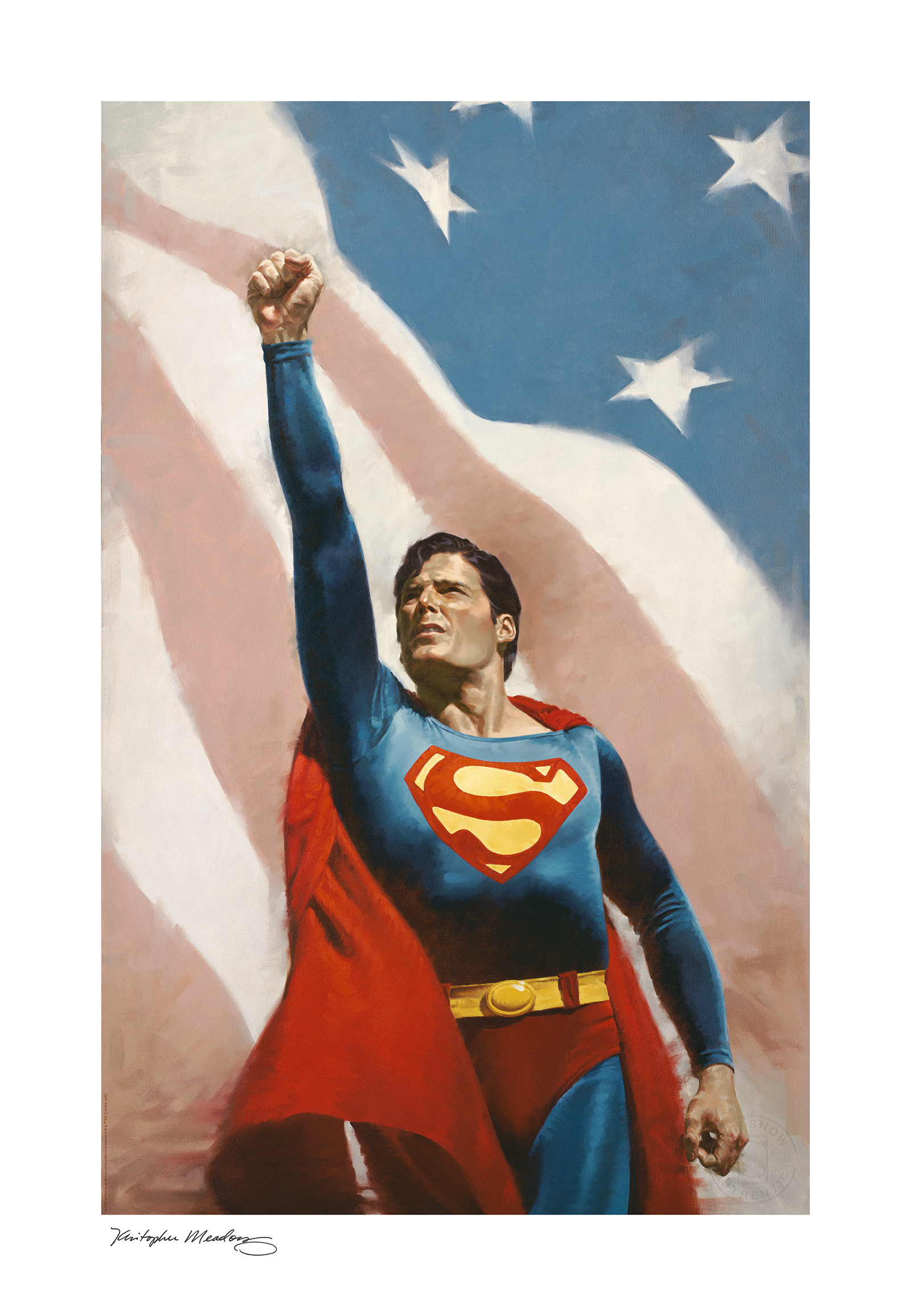