“I DIDN’T ASSSK TO BE CREATED IN A FAKE COOKING SHOW, DAD!”

Sideshow and PCS Collectibles present the Venompool 1:3 Scale Statue, based on the wildly popular playable character from the hit game Marvel Contest of Champions.

A monstrous mix between the Venom symbiote and Deadpool himself, the Venompool 1:3 Scale Statue measures a massive 40” tall and 30” wide on top of the ruins of a Sentinel head. Inspired by the in-game Savage Land stage, the former mutant-killing machine is overgrown with moss and mud as Venompool lunges into battle.

The Venompool 1:3 Scale Statue is fully sculpted from head to toe with terrifying textures where the swirling symbiote is practically sutured to his suit. Based on his unique character model, his black and red costume blends the best elements of both twisted antiheroes, including tactical pouches, a pair of wrapped katanas, and a nightmarish symbiote smile. The statue includes two swap-out portraits featuring a closed-mouth grin and an open-mouth snarl revealing his long tongue. The remnants of the cosmic champion’s chains can be seen on his ankles and wrists, proving that no restraints can match the might of Venompool. 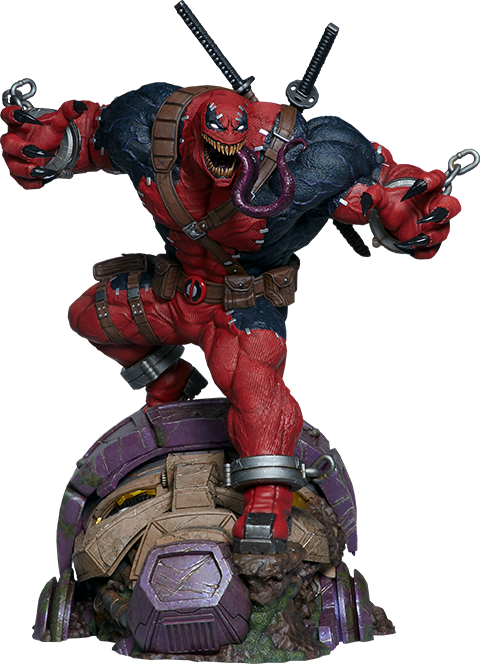