Often a great actor is remembered specifically for a particular personality that he played, or for masterfully becoming the “part” into which he had been cast and performing it with incredible brilliance. A great actor is often the sum of “his characters”.

However, this parameter does not apply to Walter Matthau. To him, a different metric has to be employed, a different way of remembering an actor. When thinking of Matthau’s films, you almost exclusively visualize Matthau himself, and the way in which his powerful stage presence, charisma, his unmistakable facial expressions dominated the scene. Just one of his unparalleled sardonic smiles was enough to pass over any caustic remark that he had made, and forgive him anything.

All considered, when considering Walter Matthau, we almost forget the actor, and often even the film and the personality whom he was playing, and we remember him alone. The man, the way he was as if reminding us of a noisy, amusing, and ironic friend whose unmistakable face made us laugh every time. This was his greatness: in every film, there was Walter, that grumpy Walter whom you would absolve for anything.

Even though he had won an Oscar and was nominated on two other occasions, he was great just for “being Walter Matthau”. His filmography is constellated with movies that have become iconic, with his participation in one of the greatest comic duos of all time, with Jack Lemmon, making Walter Matthau a timeless classic.

Bachelor, separated, a baseball commentator, a distracted smoker, an inveterate poker player, a night owl, hopelessly untidy. This would be enough to propel a character into a different world. In his finest interpretations, Walter Matthau is all this, with his annoying defects that you are always ready to forgive when you see him smile in the way that only he can. Depicting Matthau was not just a tribute to an unforgettable actor, but also an adventure in his world made of many small details that we have reproduced with great accuracy.

For example, under his arm, he is carrying a copy of the famous magazine “Sports Illustrated”, the issue published on August 19th, 1968 which was not only the year in which one of his most famous films appeared “The Odd Couple”, but also, inside, Mr. Walter Matthau is shown while enjoying a baseball match, his great passion, in the reporters’ box. In this way, utilizing the fantastic cooperation and support offered by his son Charlie, we have succeeded in capturing the essence of Matthau’s comedy talent for a statuette that will offer the perfect commemoration of the golden age of American Comedy, at last bringing back one of the most famous comic duos of all time. 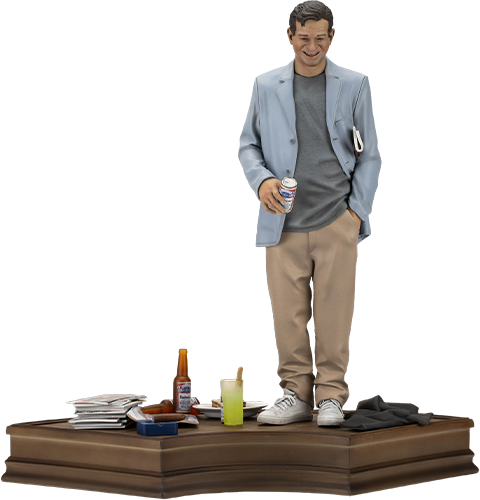