Gentleman Rex is a dapper theropod who dines in only the highest society, proving that sophistication never goes extinct.

He may be an herbivore, but everything in outer space is a little meteor to the intrepid deep-space Brachionaut.

And they say fossils tell no tales, but they’ve never met the MosasARRR!, a salty sea dog worth weighing anchor for.

Make no bones about it- these limited-edition Designer Dinos by Tom Whalen are packed with prehistoric personality that you’ll want to excavate for yourself.

Artist Statement: Dino-science is evolving at a rapid pace, and with it, so is our perception of what prehistoric beasts looked like. Feathers?! Honking T-rexes?! Crazy and also true. BUT what if we could take what made the gigantic, scaly, lumbering dinosaurs we knew and loved as kids and pushed those archetypes into the future? Start digging into Whaleontology! From the vivid mind of Tom Whalen comes a line of evolutionary descendants of the dinosaurs— equipped, adorned, embellished, and reimagined with ferocious flair!

Artist Bio: Tom Whalen (aka @Strongstuff) is a designer/illustrator who has been forging pop-culture imagery for the past decade and a half. Raised on a steady diet of comic books, ‘80s action flicks, action figures, and (lots of) Swedish fish, Tom has (kind of) grown up and had the honor of partnering with some of his childhood-favorite brands including Marvel, Lucasfilm, Toho, Hasbro, and Disney to create collectible posters, apparel, packaging, and pins. Whaleontology is Tom’s first foray into toy design. 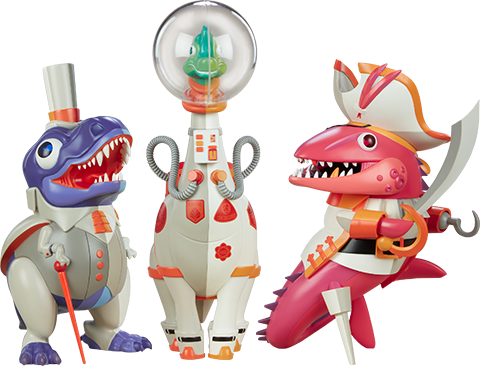